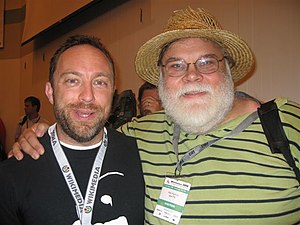 AKA Alex7561 [editor's note: the Wikipedia article, Alex Roshuk notes that Roshuk died November 9, 2014. Confirmation on Facebook, which indicates that death was on or before November 9.]

According to this WR thread3, essentially, he has three main beefs:

The project was initially designed to be a free, open social experiment in sustaining a membership community around the principal of writing a better encyclopedia. Jimmy Wales personally derailed that design by striking "membership" as a construct, and by taking personal control of the encyclopedia's editorial process -- something which he is not qualified to do.
(2) Criticism from dissatisfied former contributors is all too often suppressed or erased.
(3) From a legal standpoint, Jimbo Wales doesn't have the foggiest clue what he's doing. The guy is loud, boisterous, and really has his moral compass fixed with SuperGlue.

As a side-note, he also thinks Jimbo's confrontation with MyWikiBiz proved only one thing -- the "rule" is that the only person who can personally profit from Wikipedia is Jimbo Wales.

Alex has posted this statement on all of his user and talkpages:

Alex756 never thought when granting a GFDL license to the foundation that his membership rights would be unilaterally terminated and he hereby gives notice that he also revokes all GFDL and CC licenses due to said misrepresentation of the Board of Trustees (BoT) and herewith demands that all his contributions to the Wikipedia encyclopedias prior to this page be removed because they are infringements on his copyrights.

The point is he is pretty flaky and he does not keep his word. He just makes statements and expects us "peons" to forgive him for his lapses because he thinks we want access to him. I don't need people like that, we have a word for them here in Brooklyn: hypocrites.

(note: Roshuk once had a blog here9 , which appears to be abandoned and is filling up with spam. Archive.org has an archive of it from 2008. I have copied the contents to .)